Francis, the man of God, left home behind,
abandoned his inheritance and became poor and penniless,
but the Lord raised him up.
– Entrance Antiphon: Mass St. Francis of Assisi Memorial, October 4, 2013

This painting, called “Saint Francis of Assisi Receiving the Stigmata” was made in Netherlands (15th-16th century) and resides in the Philadelphia Museum of Modern Art. 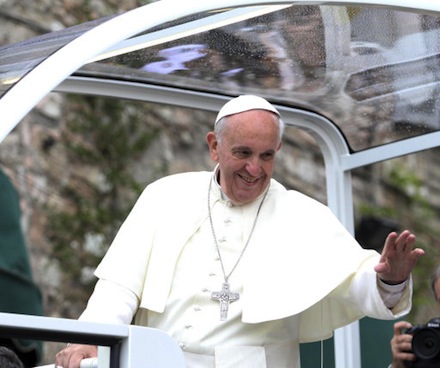 Although Pope Francis is a Jesuit, he chose the papal name Francis in honor of Saint Francis of Assisi. He has admitted that his favorite saints are Saint Augustine and Saint Francis. Pope Francis has been called an innovator, the church’s Steve Job’s. (NYT 10/3/13 Why Italians Love Francis) 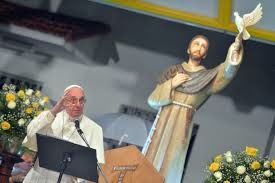 As we bring you these offerings, O Lord,
we pray that we may be rightly disposed
for the celebration of the mystery of the Cross,
which Saint Francis so ardently embraced
Through Christ our Lord.
– Prayer over the Offering: Mass St. Francis of Assisi Memorial, October 4, 2013

Pope Francis in Assisi with dove 2013 Feast of St. Francis.

Grant us, we pray, O Lord,
through these holy gifts which we have received,
that, initiating the charity and apostolic zeal of St. Francis,
we may experience the effects of your love
and spread them everywhere for the salvation of all.
Through Christ our Lord.
– Prayer After Communion: Mass St. Francis of Assisi Memorial, October 4, 2013

The cross of St. Francis, called the San Damiano cross has deep meaning to Catholics. This cross is a variation of the original cross where Francis heard God speak, “Build my church”. It is located in St. Basil’s Chapel in Kimberton Pennsylvania.

The San Damiano Cross at the Padre Pio Center in Barto, Pennsylvania. The cross is called an icon cross since it contains images of people who give it meaning.

Closeup of the San Damiano Cross at the Padre Pio Center in Barto, Pennsylvania. The original cross is revered in Santa Chiarra (St.Clare) Church in Assisi, Italy. Painted on walnut wood in Umbra in the 12th century, the name of the painter is unknown. in 1257 the Poor Clares left San Damiano and took the cross with them, keeping it safely for 700 years. In Holy Week of 1957, it was placed on public view for the first time over the new Altar in San Giorgio’s Chapel in the Basilica of St Clare of Assisi.

Above is the original San Damiano cross in Italy. The largest figure and giving light to others in the icon is Jesus Christ. “I am the light of the world. Whoever follows me will not walk in darkness, but will have the light of life. ” (John 8:12) Christ stands upright, not nailed, not a corpse, but of God Himself, incorruptible unto eternity and the source of life, radiating the hope of the Resurrection. The eyes of Jesus are open: He looks out to the world, which He has saved. He is alive, the one who is eternal. Jesus’ vestment is a simple loin cloth – a symbol of both High Priest and Victim. The chest, throat and neck are very strong, Jesus gives power of re-creation to His Disciples (John 22:23). He breathed on His Disciples (John 20:22), the Greek word used recalls the moment of Creation (Gen 2:7). The shadow over the face of Jesus is increased by the fact the halo and face are tilted forward on the original Icon. The humanity of Christ veils the true glory of the Word who lives in the super luminous darkness of the Godhead. Behind the outstretched arms of Christ is His empty tomb, shown as a black rectangle.

The next largest figures are the five witnesses of the crucifixion and witnesses of Jesus as Lord. On the left side are the Virgin Mary and St. John the Evangelist, to whom Jesus entrusted his mother. On the right side are Mary Magdalene, Mary, Mother of James, and the centurion who in Matthew’s Gospel account asks Christ to heal his servant, who is also depicted on the cross on the shoulder of the centurion (Matthew 8:5-13). Both Mary and Mary Magdalene have their hands placed on their cheeks to reflect extreme grief and anguish. The first four witnesses are saints who gave their lives for the Lord and are therefore represented with halos of sanctity. The names of the five major witnesses are written beneath their pictures.

More on Mary and John. As in John’s Gospel, Mary and John are placed side by side. Mary’s mantle is white meaning victory (Rev 3:5), purification (Rev 7:14); and good deeds (Rev 19:8). The gems on the mantle refer to the graces of the Holy Spirit.

The dark red worn under the mantic indicate intense love, while the inner dress is purple – the Ark of the Covenant (Ex 26: 1-4).
Mary’s left hand is raised to her cheek – her acceptance and love of John, and her right hand points to John while her eyes proclaim acceptance of Christ’s words “Woman, behold your son… ” (John 19:26). The blood drips on to John at this moment. John’s mantle is rose color indicating eternal wisdom, while his tunic is white – purity. His position is between Jesus and Mary as is fitting for the disciple loved by both of them. He looks at Mary “Son, behold your Mother”, but points to Christ.

On the lower left is Longinus the traditional name of the Roman soldier who pierced the side of Jesus with a lance. He is represented here as holding the lance and looking up at Jesus. The blood running down the right arm of Jesus begins at the elbow and drips straight down and will land on the upturned face of Longinus.

In the lower right is Stephaton, the traditional name for the soldier who offered Jesus the sponge soaked in vinegar wine. From his posture, one can see that he holds the staff and sponge in the same way that Longinus holds the lance.

Mary Magdalene. Mary Magdalene is next to Christ making her very special; her hand is on her chin indicating a confided secret “He is risen “. She wears scarlet, which is a symbol of love; her mantle of blue deepens this.

Mary Clopas. Some authorities make her the mother of James. She wears garments of an earthen color a symbol of humility, and her light green mantle – hope. Her admiration of Jesus is indicated by the gesture of her hand.

The Centurion of Capernaum. He holds a piece of wood in his left hand, indicating his building of the Synagogue (Luke 7: 1 – 10). The little boy beyond his shoulder is his son healed by Jesus. The three heads behind the boy show “he and his whole household believed” (John 4: 45 – 54). He has extended his thumb and two fingers, a symbol of the Trinity, while his two closed fingers symbolize the hidden mystery of the two natures of Jesus the Christ. “Truly He is the Son of God” (Mark 15:39). 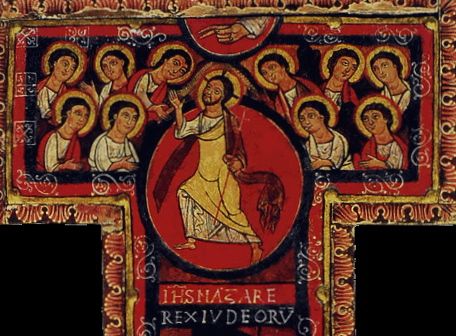 The Ascension is portrayed within this circle of red: Christ is breaking out of the circle, holding a golden cross which is now His Royal Scepter. His garments are gold – a symbol of royalty and victory. His red scarf is a sign of His Dominion and Kingship; exercised in love. Angels welcome Him into Heaven. IHS are the first three letters of the name of Jesus. The little bracket above indicates it is shorthand. NAZARE is the Nazarene; REX is’ king’ and IUDEORUM is ‘of the Jews’, which is reported in St John’s Gospel “Jesus the Nazarene, King of the Jews”

The Hand of the Father. From within the semi-circle at the very top of the Icon, He whom no eye has seen reveals Himself in a benediction. This blessing is given by the right hand of God with the finger extended – the Holy Spirit. The Father gives the gift of the Holy Spirit to all because of the merits of the Christ’s Passion

Numbers. There are 33 figures in the Icon – Two Christ figures, 1 Hand of the Father, 5 major figures, 2 smaller figures, 14 angels, 2 unknown at His hands, 1 small boy, 6 unknown at the bottom of the Cross and one rooster. There are 33 nail heads along the frame just inside the shells and seven around the halo.

The Unknown Saints. At the bottom of the Icon are six unknown saints whom Scholars postulate are SSTs Damian, Rufinus, Michael John the Baptist, Peter and Paul, all patrons of Churches in the Assisi area. St Damian was the Patron of the Church that housed the Cross and St Rufinus was the Patron Saint of Assisi. There is too much damage of that area to make a proper identification.

The Rooster. The inclusion of the rooster recalls the denial of Peter who wept bitterly. Secondly, the rooster proclaims the new dawn of the Risen Christ 1 the true light (1 John 2:8). “But for you who revere my name, the Sun of Righteousness will rise with healing in its wings” (Malachi 4:2 or 3:20 depending on your translation).
(Adapted from The Franciscans Friars web site)

The coat of arms of Archbishop of Philadelphia Charles Chaput.

The coat of arms is a written playbook of Archbishop Charles Chaput. It describes the Archbishop’s background, upbringing and beliefs and references the Archdiocese of Philadelphia. Specific to St. Francis, is above the gold line which shows the insignia of the Capuchin Franciscan order, which Archbishop Charles joined in 1965. The sacred wounds that appear on the palm of each hand make it easy to identify the arm of the Lord Jesus and that of Saint Francis of Assisi, with whom the Lord shared the Stigmata in 1224.

Behind the arms, which are crossed like an “X” (in saltire) appears a particular type of Cross, shaped like the Greek letter Tau, similar to the Roman capital “T”. Saint Francis often marked his own letters with a Tau; his biographers suggest that the practice may have started after he heard a homily given by Pope Innocent III, at the opening of the Fourth Lateran Council in 1215. The pope referred to a passage in the Book of the Prophet Ezekiel (9:4), in which the prophet has a vision of the Lord preparing to purify his holy city, and ordering an angel to mark with a Tau all the people who separate themselves from corrupting influences and who pray and do penance for those who are affected by the evil in the world. For Saint Francis and for his spiritual children, the Tau remains an important call to conversion, and a reminder of the prophetic mission to work for the evangelization and renewal of the world.

(excerpt from Archdiocese of Philadelphia Charles Chaput Coat of Arms.)