Padre Pio was famous for bilocation.  He appeared in others dreams, by voice, by his presence, fragrance and bilocating in physical form.  Near Barto, Pennsylvania, Padre Pio bilocated into Vera Calandra’s life, asking her to come to Italy quickly (he was to die several months later) and see him, as her daughter’s health was deteriorating.  It was 1968 and doctors had surgically removed the child’s bladder, but after seeing Padre Pio in Rome, the child miraculously received a new bladder.

This became another of the known miracles attributed to Padre Pio, but not the miracle used for beatification or canonization. Later in life, Ms. Calandra went on to build The National Centre for Padre Pio in Barto Pennsylvania, a true devotion to the saint.

Jesus, Mary and Joseph, the original Holy Family at the National Centre for Padre Pio in Barto, PA.

May the example of the Holy Family,
with the aid of your Holy Spirit,
guide all families, especially those most troubled,
to be homes of communion and prayer
and to always seek your truth and live in your love.
through Christ our Lord. Amen.

Although a Jesuit, Pope Francis has a strong devotion to St. Francis of Assisi, founder of the Franciscan Order, as evident by taking the saints name.

Pope Francis has visited and prayed at the site of the original San Damiano Cross in Santa Chiarra (St.Clare) Church in Assisi, Italy.

Padre Pio, a Capuchin Franciscan is intimately familiar with St. Francis, and like Pope Francis, has also prayed at the San Damiano Cross.

Pope Francis visited the USA and Philadelphia, Pennsylvania, roughly 50 miles from the National Centre of Padre Pio in Barto, Pennsylvania, where the miracle that made Padre Pio a saint originated.

Pope Francis will have the Jubilee of Mercy in 2016, to highlight the Catholic Church’s “mission to be a witness of mercy.” Jubilee for Padre Pio’s Prayer Group will take place Feb. 13, 2016, as the body of Padre Pio will be exposed in St. Peter’s Basilica Feb. 8-14, at Pope Francis’ request.

Painting in Our Lady of Grace Chapel, Barto PA.

Padre Pio celebrated his final Mass the day before he died, on September 22, 1968. He is and will always remain a Capuchin Franciscan. Like St. Francis, Padre Pio was a stigmatic, he had on his hands, feet and side the wounds of Christ, starting in 1910 and ending a few months before his death. He performed thousands of miracles and could read the hearts of those who went to his confessional. Padre Pio’s feast day is September 23.

A replica of Padre Pio’s residence in Italy. A humble life. From the Saint Pio of Pietrelcina Museum, Barto, PA. 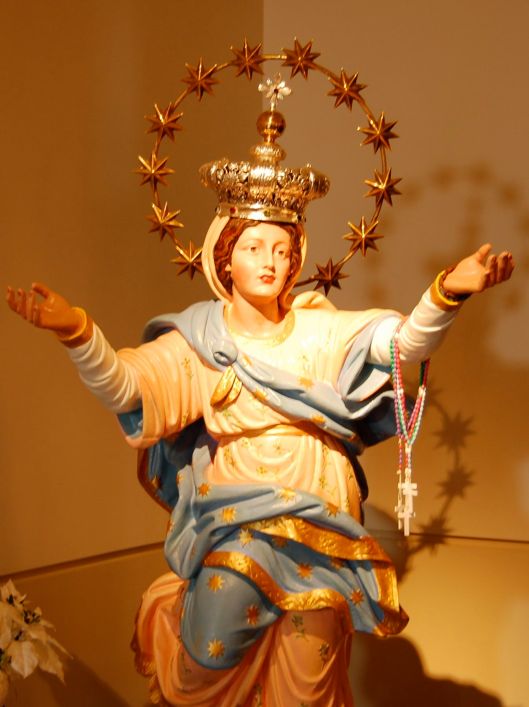 Padre Pio’s strong devotion and love to the Blessed Virgin Mary during his lifetime and continues in Heaven.

“No matter how great the trial…never lose heart. Have recourse, with more childlike trust, to Jesus who will never be able to resist bestowing on you some little solace and comfort.” Padre Pio’s Words of Hope 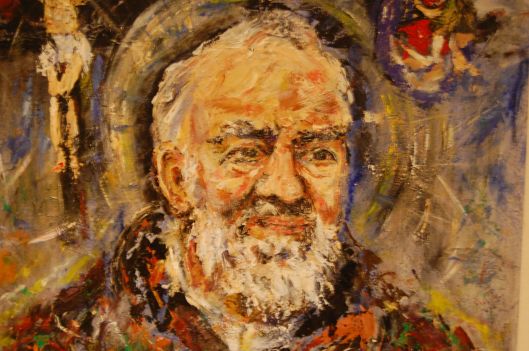 On June 25, 1950, Padre Pio was seen attending to the death of a fellow monk in Milwaukee. When asked about it he said, “If Christ multiplied the loaves and fishes, why cannot he multiply me?” 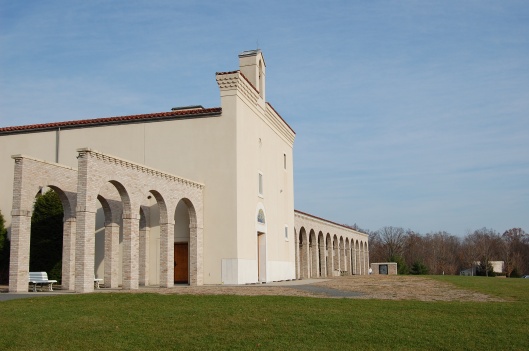 Replica of San Giovanni Rotondo at the National Centre for Padre Pio in Barto PA, about 50 miles from Philadelphia Pa.

“Go Ahead! Courage! In the spiritual life, one who does not go forward goes backward.” – Padre Pio

Padre Pio met Pope John Paul II before he was pope in 1947 and prophesied his rise to Pope after hearing his confession.

Church at The National Center of Padre Pio. On right side of altar is Padre Pio. Due to Church infighting, no Mass is offered on the premises. They do have rosary prayers and Stations of the Cross.

Replica of Our Lady of Grace Chapel that Padre Pio prayed in each day. It is modeled after a 16th Century Capuchin Franciscan Friary Chapel.

“Pray, hope, and don’t worry. Worry is useless. God is merciful and will hear your prayer.” – Padre Pio 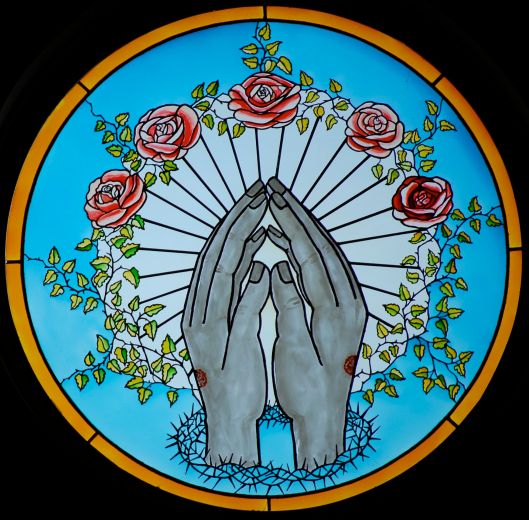 Have courage and do not fear the assaults of the Devil. Remember this forever; it is a healthy sign if the devil shouts and roars around your conscience, since this shows that he is not inside your will. 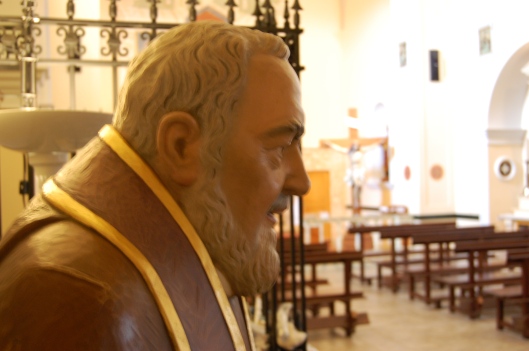 He’s with us now.

If the people of the world could only see the beauty of ones soul when it is in the grace of God, all sinners and unbelievers of this world would be instantly converted.