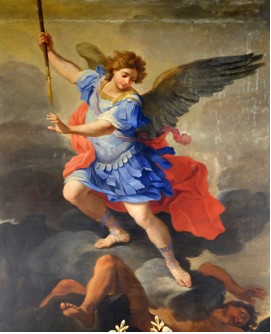 As the leader of the Heavenly Hosts against Satan, prayers to Saint Michael the Archangel have been a source of comfort for Catholics since the early days of the Church. In fact, he plays a significant role in both the Old and New Testaments, and was also a popular figure among Jews in the era pre-Christ.

Archangel saints play a major role in Catholic teaching. Although the exact number of archangels is open to interpretation, there are only three who are mentioned frequently in the Bible. They are Michael, Gabriel, and Raphael. The Church does not place emphasis on the archangel classification, although the archangels are the best known of all angels.

The heavenly host of angels is often described in military terms, which is fitting as Saint Michael is associated with action and protection, fighting Satan for the good of mankind and God. His patronage reflects this—he is Guardian of the Vatican City and patron saint of police, the military, mariners and firefighters, among others.

The many references to Saint Michael in the Bible are also in keeping with this theme. In the book of Daniel (Daniel 12:1), he is mentioned as a protector of Israel, he defeats Satan in the Epistle of Jude (Jude 1:9), and he is mentioned again in the First Epistle to the Thessalonians (Thessalonians 4:16).

His feats are often likened and claimed to have inspired the deeds of the military saints in Catholic theology, such as Saint George, Saint Gereon and Saint Martin of Tours. The story of Saint George slaying the dragon has similar themes to Saint Michael’s fight with Satan, commonly likened to being a serpent.

This image of Saint Michael, as a protector of the faith willing to go in harm’s way for the plight of mankind, is one of the reasons many Catholics pray for his intercession during challenging times. This is of particular relevance to those in dangerous professions. He is associated with many events of gravitas in the life of a Catholic, such as being the angel to escort the faithful to heaven.

A good example of the centrality of Saint Michael as a diligent and combative defender of the faith relates to the composition of the main prayer to him. Sometime around 1880, Pope Leo XIII had a vision of a terrible exchange between the devil and God. According to several sources, he subsequently created the prayer to Saint Michael as a way to ask for Michael’s intercession in times of peril.

While the Church has never confirmed that the vision indeed occurred, the prayer still stands as an example of the significance the Church places on the role of Saint Michael as a protecting and policing force.

Some lines of the prayer resonate strongly with those in law enforcement:

Saint Michael the Archangel,
Defend us in battle,
Be our protection against the wickedness
and snares of the devil

Cast into hell
Satan and all the evil spirits

His status as the patron saint of police officers is very well known, which parallels this emphasis on his patronage of those working in dangerous occupations and those members of military or martial professions. The NYPD and other police departments consider him the unofficial patron saint. Many police events are named after him around America.

Part of the appeal of prayers to Saint Michael is that he experienced many of the same tribulations as policemen. His courage was tested when combating those who sought to do harm to the faithful. Prayers, icons and medals to Saint Michael often reference the hardship faced by those who put their lives in danger daily.

Police officers, more than those in other professions, can benefit from patronage, such as that of Saint Michael. Not only are they at risk every day, but the pressures of the job can take a toll on their personal lives.

At work or at home, a strong faith to call upon and a sense of the challenges overcome by a patron saint, such as Michael, can bring about further resolve and presence of mind. Taxing and hectic jobs can sometimes make people lose touch with what is actually important like God, faith and family, so it’s also good that the prayers to Saint Michael mention the goal of protecting what is best to keep one’s spirits high during difficult times.

A St. Michael necklace or medal is a traditional token of faith for Catholics, whether or not they are in law enforcement. Saint Michael’s necklace is a good way to keep in touch with your faith as a source of strength during stressful times.

The Church teaches that while medals and necklaces should not be emphasized as a talisman or seen as a holy artifact, they are certainly a valuable way to remind one of the Church and its teaching to strengthen one’s faith. Saint Michael medals often portray the saint with a sword, clad in armor, brandishing the banner and standard of the Lord.

Saint Michael is typically portrayed in art confronting Satan. There are many such works by the most famous artists in history, including Raphael, Michelangelo and Rubens.

These paintings and sculptures have a very dramatic setting, depicting Saint Michael’s defense of heaven, casting the Devil from into the abyss or pinning him to the ground underfoot. He often strikes a commanding pose, with a shield and a formidable sword.

It is fitting that police officers have the patronage of such a high-ranking angel who protects the faithful and was at the forefront of the defense of Heaven itself. Medals and art commemorating this link between the person of Saint Michael and martial professions have been a source of faith for Catholics for centuries. Catholics in the policing profession can fortunately take solace in the knowledge that the chief of all angels is provided as an example to follow of how to confront adversaries in the name of good.

Guest Post:
Megan Dahle is a Catholic blogger and internet retailer at DiscountCatholicProducts.com. Her writing emphasizes prayer life, traditions and forms of worship. Megan likes giving reinforcement to live bravely as a Catholic.