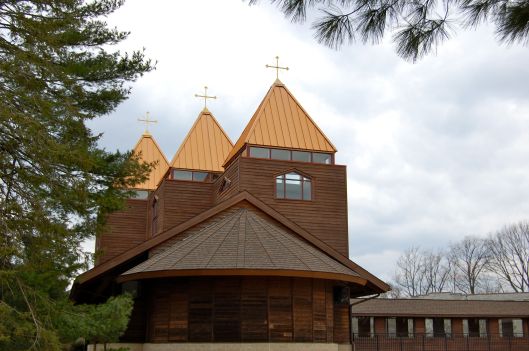 Located in Fox Chase Manor, Pennsylvania, a suburb of Philadelphia, the Basilian Spirituality Center is part of the Eastern Byzantine Ukrainian Catholic Church, under the umbrella of the Ukrainian Greek Catholic Archeparchy of Philadelphia. 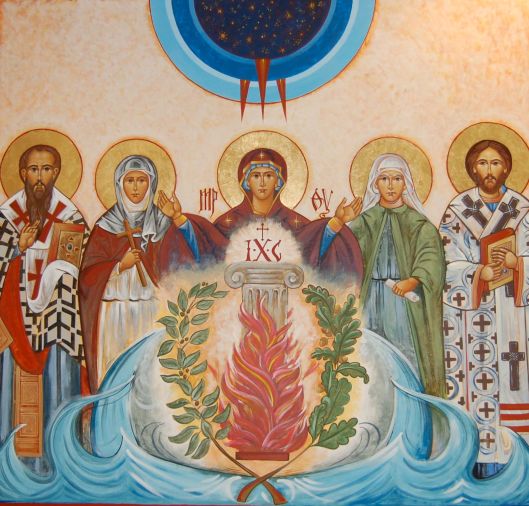 Icons play a significant role in the Eastern Byzantine rite.

The “Basilian Family” icon, located on a wall within the retreat center is especially core to the Sisters of the Order of St. Basil the Great. Central in the Basilian Family is Mary, her arms outstretched and the name of her Son, “IXC”, radiating from her body. In Eastern Byzantine rite this is called The Theotokos, Mary Mother of God. Macrina The Elder is to the right of Mary, to whom St. Basil attributed much of his spiritual formation. She is dressed in green, the symbol of the Holy Spirit, a woman of spiritual gifts and the wisdom of God. To the right of Macrina the Elder is St. Gregory of Nyssa, brother of St. Basil, holding the gospels as a symbol of his preaching abilities and is dressed in the ecclesiastical garb of a Bishop. To the left of The Theotokos is Macrina the Younger, Basil’s sister, in monastic garb as a foundress of the community of Neocaesarea and next to her is St. Basil also dressed as a Bishop carrying the gospel.

Inscribed above the wall of the Basilan Family, is the love poem from Song of Songs v8:6-7
“Set me as a seal on your heart, for love is as strong as death, its flames are flames of fire, many waters cannot quench love.” 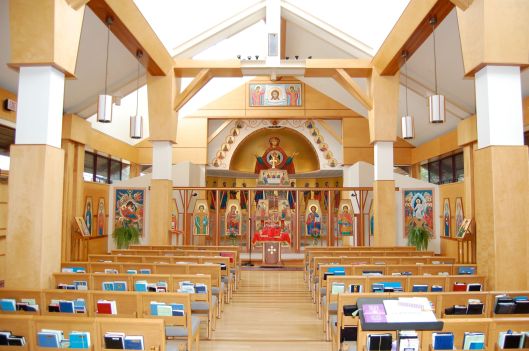 The Byzantine rite is one of several Eastern rites recognized in full communion with the Bishop of Rome; Pope Francis. Its origin can be traced to the ancient city of Byzantium (modern-day Istanbul), renamed Constantinople when the emperor Constantine relocated his capital city there from Rome in A.D. 330. 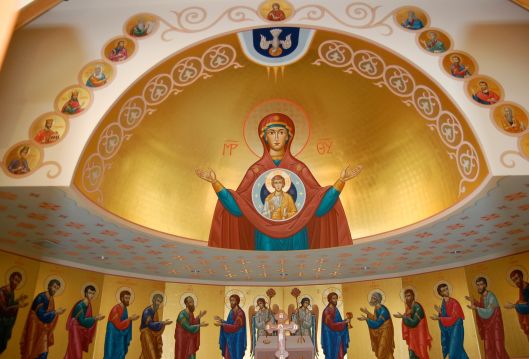 On the rear wall of the Holy Trinity Chapel, the Chapel of the Sisters of the Order of Saint Basil the Great, is the “Theotokos” icon, meaning “God Bearer” or ‘Mother of God’. Mary is the Theotokos, the one who gave birth to God. This was the Council of Ephesus (in 431) and the Council of Nicea’s definition of Mary since Jesus was true God and true Man, so Mary could be called “Mother of God”. It appeared in the Archbasilicas of Rome, built by Constantine in one of the first churches ever built.

Jesus at the Garden of Gethsemane

The Eastern Ukrainian Byzantine Church has 5.5 million followers. Typically the sanctuary is separated from the congregation by an iconostasis, a screen covered with icons. Leavened bread is used for the consecration of the body of Christ in the liturgy (not called the “Mass” in Eastern rites), which is either the liturgy of St. John Chrysostom or that of St. Basil the Great. Communion is received under both kinds and administered by the priest using a spoon to the faithful.

Located on the ceiling in the nave of the Chapel is the Pantocrator Icon, “Ruler of All”, Christ blessing his people. The Pantocrator is present in most Eastern Byzantine churches along with the Theotokos described earlier. 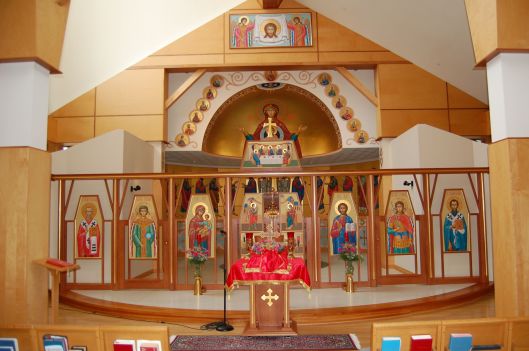 Byzantine Catholics operate under a different code of canon law. They also celebrate a somewhat different liturgical year with some unique feasts and saints. Latin-rite Catholics can attend a Byzantine liturgy to fulfill their obligation to attend Mass. 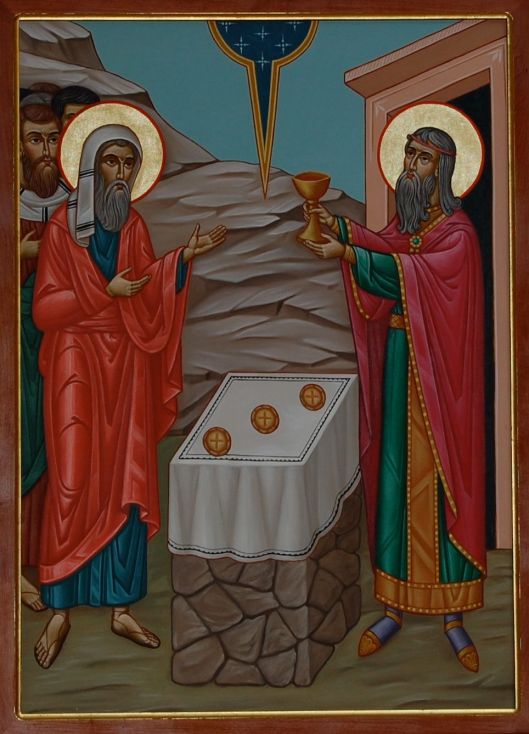 Two at the Tomb icon. 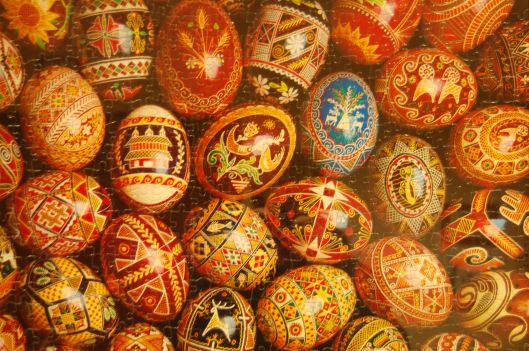 Pysanky eggs photo on display at the Basilian Spirituality Center. 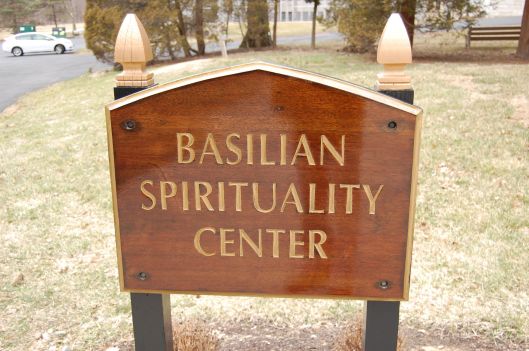 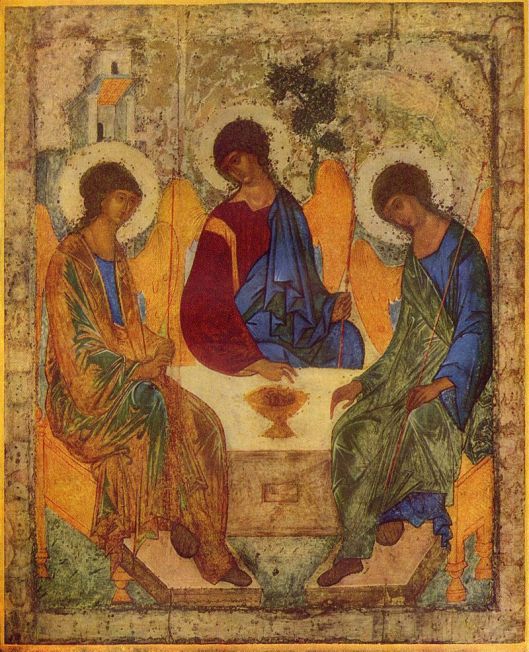 One of the all time famous icons every created, “The Holy Trinity” by Russian iconographer Andrei Rublev (1360-1370). 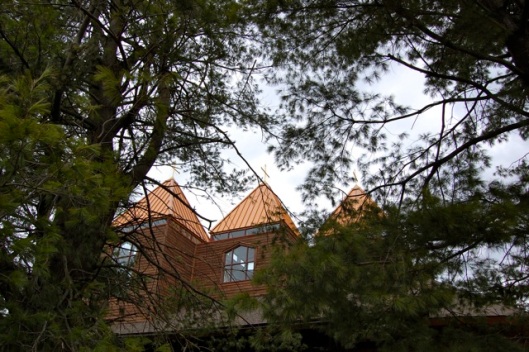 Symbolism in the three spires on Holy Trinity Sunday.

“A tree is known by its fruit; a man by his deeds. A good deed is never lost; he who sows courtesy reaps friendship, and he who plants kindness gathers love.”
St. Basil the Great