St. Patrick was the founding bishop of the Irish church. According to legend the three leaf clover or Shamrock was coined by Saint Patrick for the Holy Trinity. Saint Patrick’s Day is observed on March 17, the date of his death.

In the background of this turn of the century bavarian stained glass window is St. Kevin’s tower (a 5th century monastery) in Glendalough, County Wicklow, Ireland. It is near the village of Laraugh, home of Thomas Kinsella, the poet laureate of Ireleand. From stained glass window at St. Basil the Great Church, Chester County, PA.

Shown above is St. Patrick’s Cathedral on Fifth Avenue in New York City. Photo taken from the Rockefeller Center.

The bronze doors of St. Patrick’s Cathedral. In the main door are six figures, (including St. Patrick) each playing a significant role in local church history in the State of New York and surrounding area. Just above them is the Figure of Christ the Redeemer surrounded by the twelve apostles, the Virgin Mary, St. John the Baptist and two angels with scrolls.

St. Patrick, the patron of the Archdiocese of New York and apostle of Ireland stands in the upper right section. On his left is the mystical phoenix rising to renewed life and the word “gratis” or gratitude. On his right is the Celtic harp and the word “laus” or praise.

St. Joseph, the upper left statue holds a budding staff, token of his espousal to the Virgin Mary and a carpenter’s square, symbolic of the saint as patron of workingmen. The design to his left refers to his position as earthly father of Christ, to his right the design is symbolic of his purity of life and intention.

The middle left figure is Issac Jogues, the French Jesuit priest, who was the first Catholic missionary to enter New York state. He holds a crucifix representative of his mission to the Iroquois. The palm branch to his left is a martyrs symbol. The Greek letters ICXC and the word nika mean “Jesus Christ conquers”; the word passio means passion. The other panel has a chalice and the letters AMDG, which is the Latin motto for the Society of Jesus.

The middle right figure is that of Mother Cabrini, wearing the habit of the Missionary Sisters of the Sacred Heart, which she founded. To her left the dolphin and star symbolizes Pope Leo XIII’s direction to extend her apostolic work to the West; the word “spes” means hope. Two hands and a rose represent her heart going out to the immigrant; cor and Jesu means “heart of Jesus.”

In the lower left of the door stands St. Kateri Tekakwitha, an Indian maiden known as the Lily of the Mohawks and the Pocahontas of the Catholic Church. The design to her left shows an American eagle with the word fides meaning faith. To her right is the coat of arms of pope Pius XII, who declared her venerable in 1943. (She was canonized on October 21, 2012, Vatican City by Pope Benedict XVI)

The statue at the lower right is of St. Elizabeth Ann Seton, canonized the first American-born saint in 1975. The panel to her right shows a rose bush, for the official NY state flower and the word caritas meaning charity. On her left is the motto from Cardinal Spellman, Sequere Deum meaning Follow God. (St. Patricks Cathedral by Leland A. Cook) 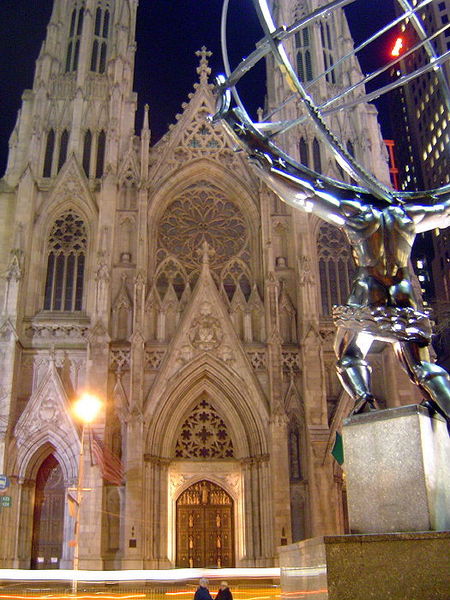 View of the Cathedral from across 5th Avenue with bronze statue of Atlas in foreground at right. 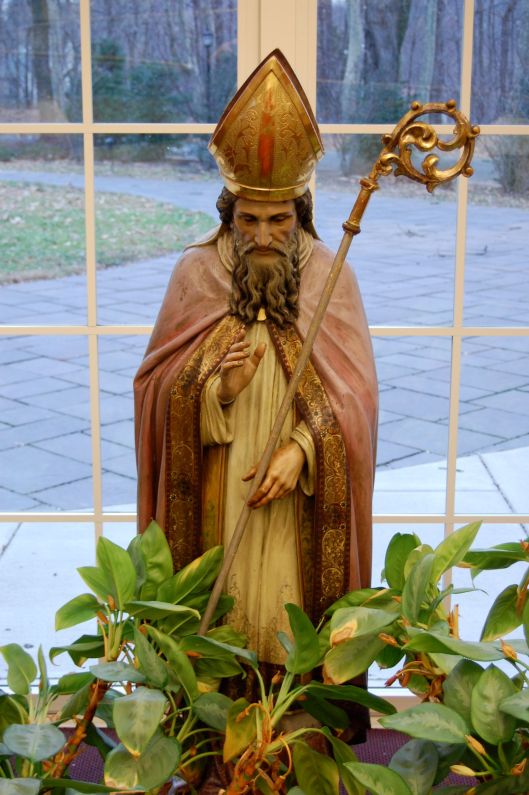 Tucked away in the library at St. Charles Borromeo Seminary in Philadelphia can be found St. Patrick.