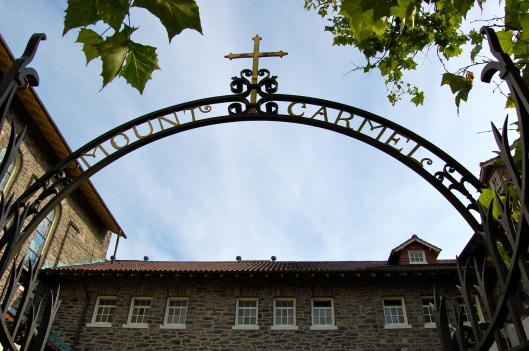 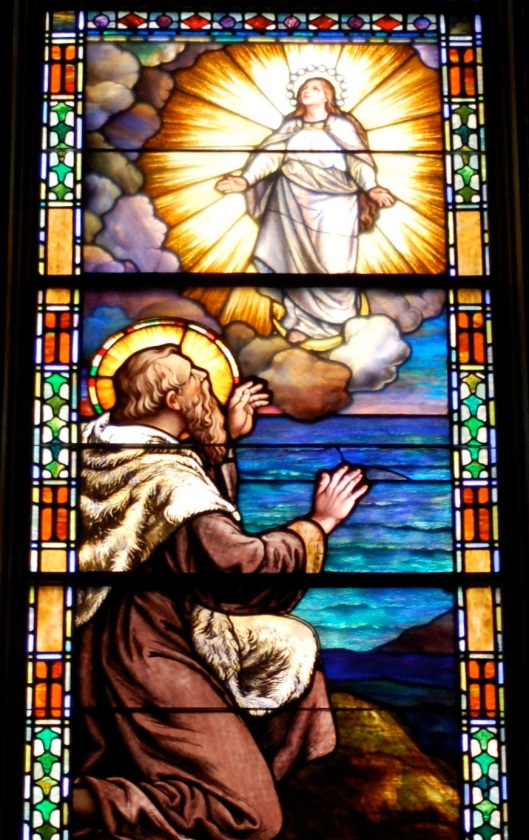 Prophet Elijah reaching for Our Lady above the cloud. The Chapel of the Holy Spirit, Carmelite Monastery in Philadelphia.

Opening stanza of a Carmelite hymn sung on the Feast Day Mass of Our Lady of Mount Carmel, July 16, 2014:

Queen and Beauty of Mount Carmel!
Seen by prophet’s mystic gaze;
Shown above the holy mountain
As Elijah kneels and prays.

Carmel is a place near modern day Haifa, Israel on the Mediterranean Sea where hermits have lived since the time of the prophet Elijah, well before the birth of Jesus.

In the Old Testament, Elijah sends his servant Gehazi up to look out over the sea seven times for a cloud to bring rain to end a drought. Elijah prayed and up from the sea came a cloud to Mount Carmel. According to the ancient tradition of the Carmelite Order, Elijah saw the prefigurement of Our Lady.

In the tradition of salvation history, the Brothers of Our Lady claimed spiritual kinship with the prophet Elijah. They strove to perpetuate through their lives of prayer, poverty, and penance the great zeal of this Old Testament saint. In Mary they found the model for a life of dedication and service to Christ. In her they saw the ideal contemplative and they took her as their mother and guide. – Fr. Gabriel Barry, O.C.D.

Cloud-like rising from the ocean,
Pure and free from every stain,
She has claimed his heart’s devotion
Through the ages to remain.
(Carmelite hymn sung on the Feast Day Mass Our Lady of Mount Carmel on July 16)

The scapular is hanging from Mary’s right hand.

Tender Mother, she has clothed us
With a double garment fair.
Pledge of heavenly protection,
Is the scapular we wear.

On July 16, 1251, the Blessed Virgin Mary appeared to St. Simon Stock, a Carmelite. During the vision, she revealed to him the Scapular of Our Lady of Mount Carmel, known as the “Brown Scapular”. Mary handed Simon Stock a brown woolen scapular and promised, “Whoever dies in this garment shall not suffer eternal fire.” The feast day of Our Lady of Mount Carmel coincides with the July 16th date of the apparition.

The brown scapular is the principle part of the religious habit of the Order of Carmel and has had special importance since the 13th century. Just as Our Lady wrapped the Christ Child in clothing which she herself prepared, so, too, she designated the holy scapular to be a sign of her motherly protection both in life and in death. In so doing, she takes upon herself all the consequences of her spiritual motherhood, guards her children and leads them to God. They, in turn, experience her powerful intercession, for the scapular is an habitual invocation of her whose prayer is always efficacious. – Fr. Gabriel Barry, O.C.D.

There is a Scapular Confraternity of Carmel available to laypeople. 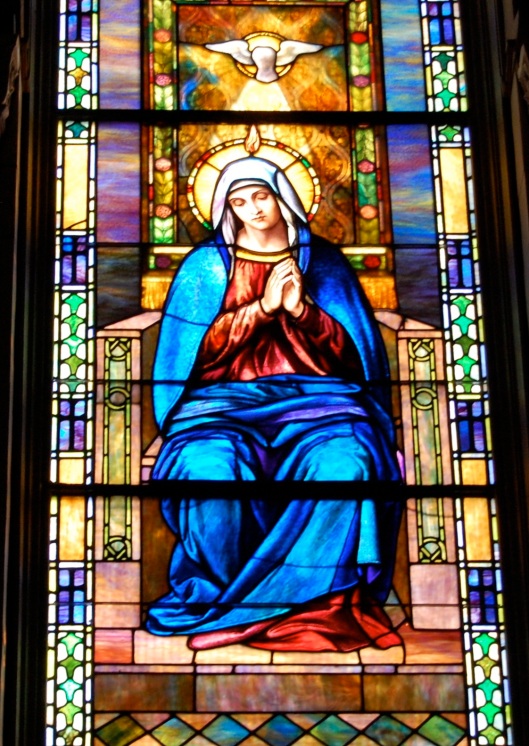 St. Therese of the Child Jesus of the Holy Face.

Also known as St. Therese of Lisieux and the Little Flower.
The “Shower of Roses” window was installed before her beatification in 1923 in anticipation of sainthood. One angel is sheathing his sword, now that the battle is over. 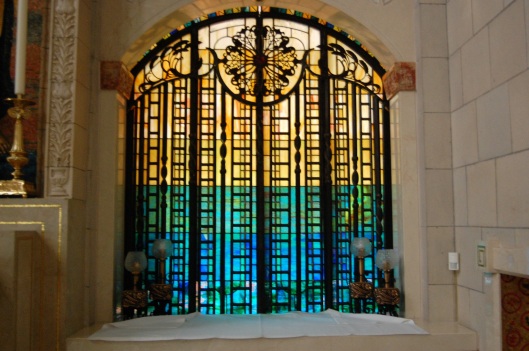 The cloistered nuns are on the other side of this separator, where they pray and celebrate Mass. The Host is passed by the priest through a section that opens within the bars. 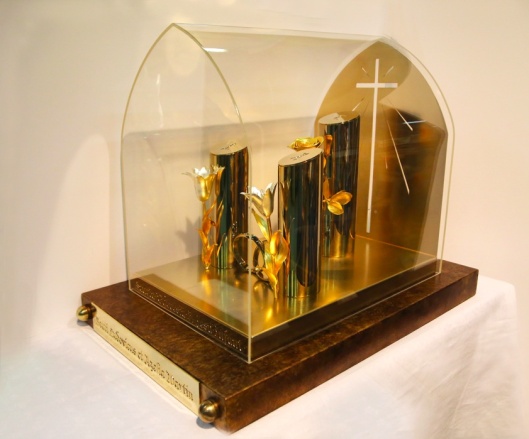 The Martin Family Reliquary at The Chapel of the Holy Spirit, Carmelite Monastery in Philadelphia. Photo credit: Fluer Nabert.

Shown above are the three individual reliquaries, housing the relics of Therese, Louis and Azellie. This is the first family reliquary for veneration and procession. The reliquary of St. Thérèse, Doctor of the Church is placed highest. Louis and Azellie reliquary are united by wedding rings. The two white lilies are for the parents and the rose is for St. Thérèse. Design by Fluer Nabert, sculpture. 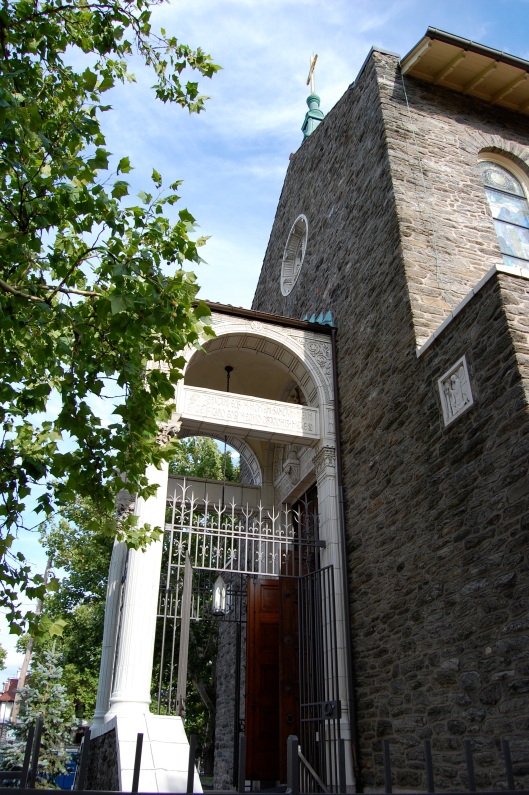 The entrance to the Chapel of the Holy Spirit, Philadelphia Carmel.

The Latin words mean:
I will bring them to my holy mountain and make them joyful in my house of prayer. – Is 56:7 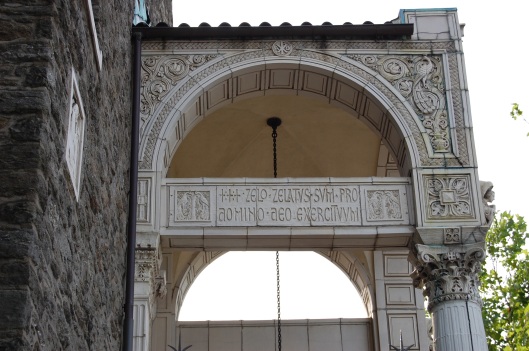 Inscription in Latin means:
With zeal have I been zealous for the Lord God of hosts – 1 Kings 19:10

The walled Monastery is off limits to the public.

The Carmelite Monastery in Philadelphia was founded in 1902, less than five years after St. Thérèse died. The Carmelites have been in the current building since 1910. The entire Monastery complex was completed in 1925.

Many archives from the beginning of the Monastery at Philadelphia Carmel to the modern day have survived and been preserved for public use. The Carmelites created one of the most inspiring religious websites in the Archdiocese of Philadelphia. It includes digitized historical content from their archives including “Lights on Liturgy” prayers, letters from Cardinals, YouTube video, photos and events. The link is here: Discalced Carmelite Nuns of Philadelphia.

The altar in the Chapel of the Holy Spirit.

On the left is St. Teresa of Jesus (Teresa of Avila), founder of the Discalced Carmelites along with St. John of the Cross and on the right is St. Elisha with hand outstretched, a prophet who followed in Elijah’s footsteps. 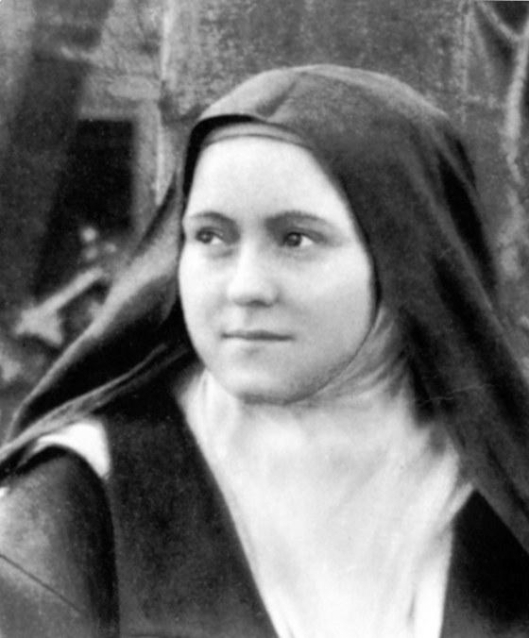 I desire only this science of love…I understand so well that it is only love which makes us acceptable to God that this love is the only good ambition. Jesus deigned to show me the road that leads to Divine Furnace [of God’s love] and this road is the surrender of the little child who sleeps without fear in it’s Father’s arms. – St. Thérèse of Lisieux (SS 187-188)

Shrine of the Holy Face of Jesus.

Original papal document dated 1895 of an appearance of the living face of Christ on a Veronica’s Veil witnessed by many during veneration.

The Holy Face of Jesus detail.
In Rome in 1849, a miracle occurred where the Face of Christ appeared during veneration of Veronica’s Veil. It lasted 3 hours with a bright illumination witnessed by a group that was present. An engraving of the image on the veil was made to commemorate the event and a reproduction, authenticated by the Vatican, is now housed at Philadelphia Carmel. In Latin it’s called Sacri Vultus, the Holy Face Relic.

St. Therese of the Child Jesus of the Holy Face carried Jesus face close to her heart.

Pope John Paul II proclaimed Thérèse of Lisieux a Doctor of the Church in October 1997, the year of her 100th anniversary of her death, making her the youngest and most contemporary of all Doctors of the Church. Her sisters, also religious, lived to be in their 90’s. If Therese had also lived that long, she would have lived to 1963. That would put her in the same era as Padre Pio, who was born fourteen years after Thérèse in 1887 and passed in 1968 at age of 81 years old. 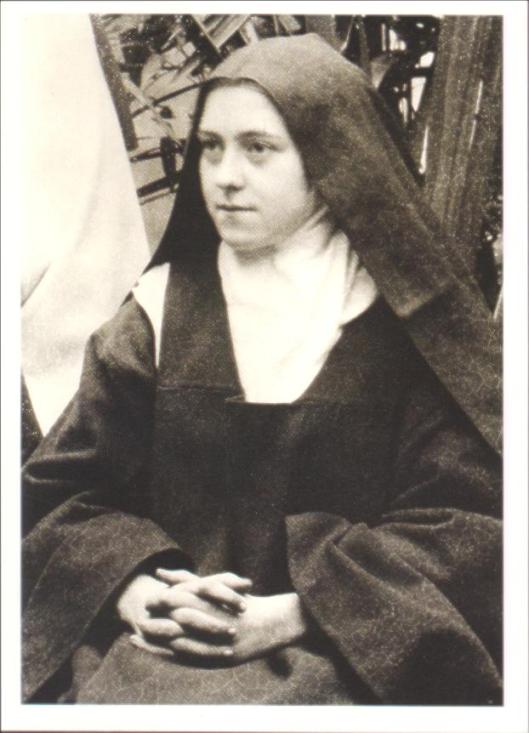 Thérèse of Lisieux, a Professed Discalced Carmelite Nun at the Monastery of Lisieux.

I understand that all souls cannot be the same, that is necessary that there be different types in order to honor each of God’s perfections in a particular way. To me He has granted His infinite mercy, and through it I contemplate and adore the other divine perfections! (SS180) – Therese of Lisieux from Walking the Little Way of Thérèse of Lisieux, Discovering the Path of Love. Joseph F. Schmidt FSC 2012 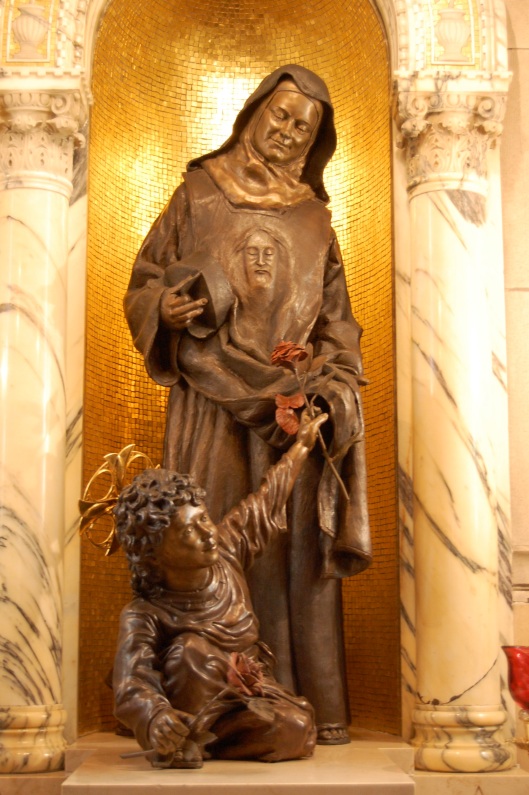 From the Side Shrine in Honor of St. Thérèse of Lisieux.

St. Thérèse was canonized in 1925. The statue of St. Thérèse with the face of Jesus was donated in 1997, the same year Therese was honored as Doctor of the Church by St. John Paul II. She is holding a Doctoral biretta in her right hand. 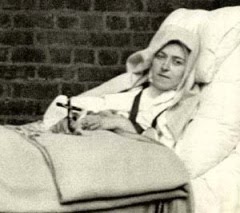 At the time of her death, Therese knew no more than 50 people, having lived in a cloistered, contemplative convent. As she studied and prayed the science of love from her own experiences, her wisdom blossomed.

I wanted Carmel as soon as I learned of it; I find that all the aspirations of my heart are fulfilled in this Order. – Saint Thérèse of Lisieux

“I am not dying; I am entering into life,” wrote Thérèse of Lisieux a few weeks before her death in Carmel on September 30, 1897, at the age of 24. 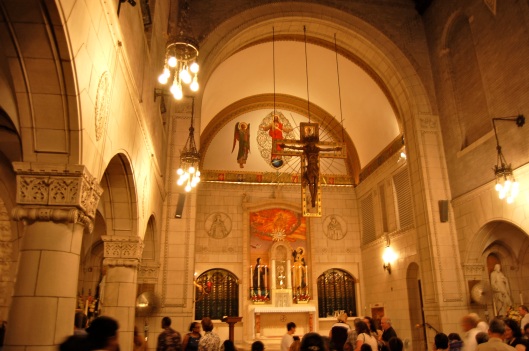 Chapel of the Holy Spirit after Our Lady of Mount Carmel Feast Day Mass, July 16, 2014.

The Carmelites host an Public Novena in honor of the Blessed Virgin Mary of Mount Carmel each July.

A plenary indulgence is given for anyone visiting the Carmelite Chapel on July 16.

Mary, be mindful of us as we kneel before you.
By your love of God, hear us; by your fidelity to God, intercede for us;
by your power over the devil, protect us.

O Mary, conceived without sin,  pray for us who have recourse to Thee! From the Flos Carmeli Prayer, Latin for “Flower of Carmel” by St. Simon Stock (1165 – 1265), a Carmelite. This prayer is also a favorite at the Miraculous Medal Shrine, Philadelphia.

Several prayers said by the Nuns at Philadelphia Carmel:

On behalf of those who have said no prayers today, let us say: Our Father… Hail Mary…

On behalf of those who neglect to praise God and thank Him, let us say: Blessed be God. Blessed be His holy name.

On behalf of those who blaspheme and neglect the Blessed Sacrament, let us say: Blessed, praised, worshiped and adored be Jesus Christ on His Throne of Glory and in the Most Holy Sacrament of the Altar. – from Night Litany for Our City.